Many moons ago, I minored in journalism, with a communications major, after deciding rashly that elementary education wasn’t for me. How funny that I now have my own little homeschool!

All those moons ago, I interned for a local magazine, then did grunt work (developed photos, gathered court documents, and wrote rarely) for a small business newspaper.
After that trying year, went back to the first magazine, as it was a much better atmosphere to try my hand at freelancing, as they specialized in what I have discovered is “my” kind of writing: profiles, which were basically mini-biographies. I even had a cover story way back then. Whoo hoo!
I felt unorganized with my time and writing an article or two a month, wasn’t making much income.
I guess I was afraid to say I was a writer and put myself out “there” to do the hard work of marketing myself and look for other publications.
Long on scared and short on perseverance and diligence.
So, I went to work for a not-for-profit, which I enjoyed and then came home to raise my babies.
The writing stopped, other than a Christmas newsletter here-and-there.
I wondered why I felt to blah about so many things. Homeschool burnout and hormones did a number on me and I needed an outlet.
The blog engineer, aka sweet Kyle, enjoyed the lengthy tome-like e-mails he received at work and bought a domain name for me. I still drug my feet.
After writing fairly regularly for a few months, I stopped this summer because it just didn’t feel right to write. I grew weary of writing about myself.
So, just this week, we have been tossing around ideas of people in my circles that I could interview and write about. I’m looking forward to it. Writing is such a good outlet and I would like to make it a ministry as well.
END
Disclosure: I re-set the timer for another five and finally stopped when the duck quacked for the second time.

Lisa-Jo wrote today about where she is able to worship. I am thinking about what I worship and who I should worship.
My items of worship can vary from day-to-day, but for the most part the list is pretty static:
~ Peace (and quiet).
~ Unity (I love Psalm 133:1).
~ Organization.
~ Schedules.

Realizing the problem is a huge first step in solving it, but long-held bad habits are hard to break.
It is time though. Really time, to put first things first. Time to really worship Jesus, not just in a nice word here or there, but in action.
It is time to set a better, much better, example to my children of putting my worship of Jesus first, not my “wish” worship list.

Psalm 95:6-7 (NIV)
6 “Come, let us bow down in worship,
let us kneel before the Lord our Maker;
7 for he is our God
and we are the people of his pasture,
the flock under his care.”

Writing with the Five Minute Friday group today.
Here are the rules:
1. Write for 5 minutes flat with no editing, tweaking or self critiquing.
2. Link back here and invite others to join in {you can grab the button code in my blog’s footer}.
3. Go and tell the person who linked up before you what their words meant to you. Every writer longs to feel heard.

Being present, enjoying these people God has given me. That’s what I need to concentrate on, not getting stuck in the “I wish things were different or better” doldrums.
We’re not perfect. We’ll never be perfect. I can live in the present and enjoy my blessings or wish for the future and miss out.
The temper tantrums in the car the past two days, by one boy in particular, have worn everyone’s nerves a little thin. That boy needs an extra dose of tlc from his Mama, not threats to miss out on treats. Two days in the nation’s capital, then two more long days on the road.
Prayers in the present. Patience in the present. Persevering in the present. What a gift those would be to my family. 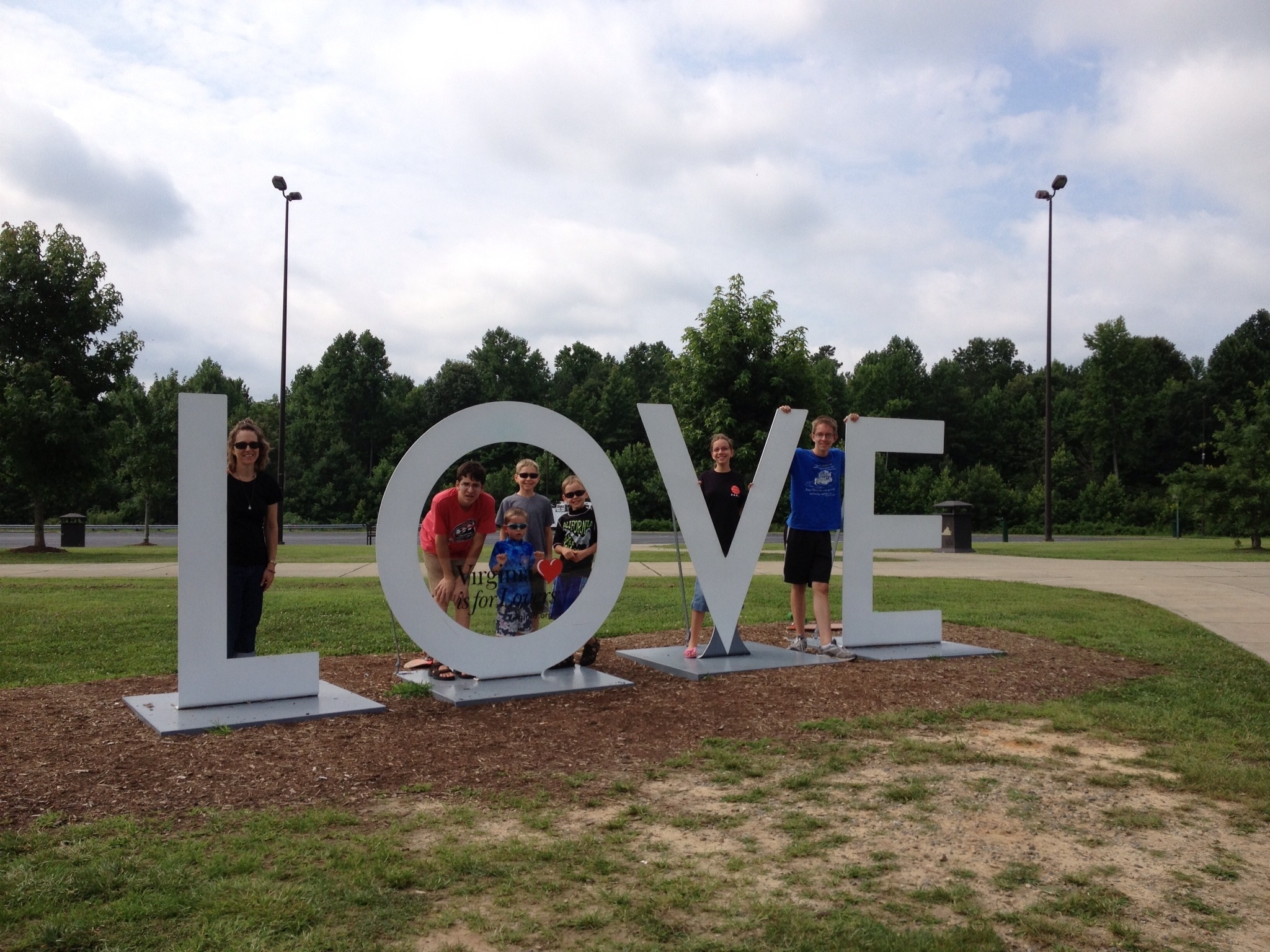 On the way to Virginia Beach on Wednesday.

1 Chronicles 23:30 (ESV)
And they were to stand every morning, thanking and praising the Lord, and likewise at evening

My oldest, Adam, started driving on Saturday!!! I can’t believe it!
He wasn’t particularly interested, but is turning 17 at the end of July, so we talked him into it (nicely forced) so he can get lots of practice in before he leaves home.
Thankfully, he has to drive with us for six months before he can get his full license.
We live less than 10 minutes from the “big” city, but are out in the country, so he has had some state highway experience already. He’ll be doing interstate driving for an upcoming summer vacation as well.
I told him on Friday after he passed his test, that it would be a whole new world. In reply, he told me that I used to not be able to wait for him to get older and be able to do things for himself and now I’m not ready. So true! Very strange!
Babbling, crawling, talking, walking, bike riding, telling time, swimming, reading, plus more, are all life skills that are very important, but driving! Yikes! 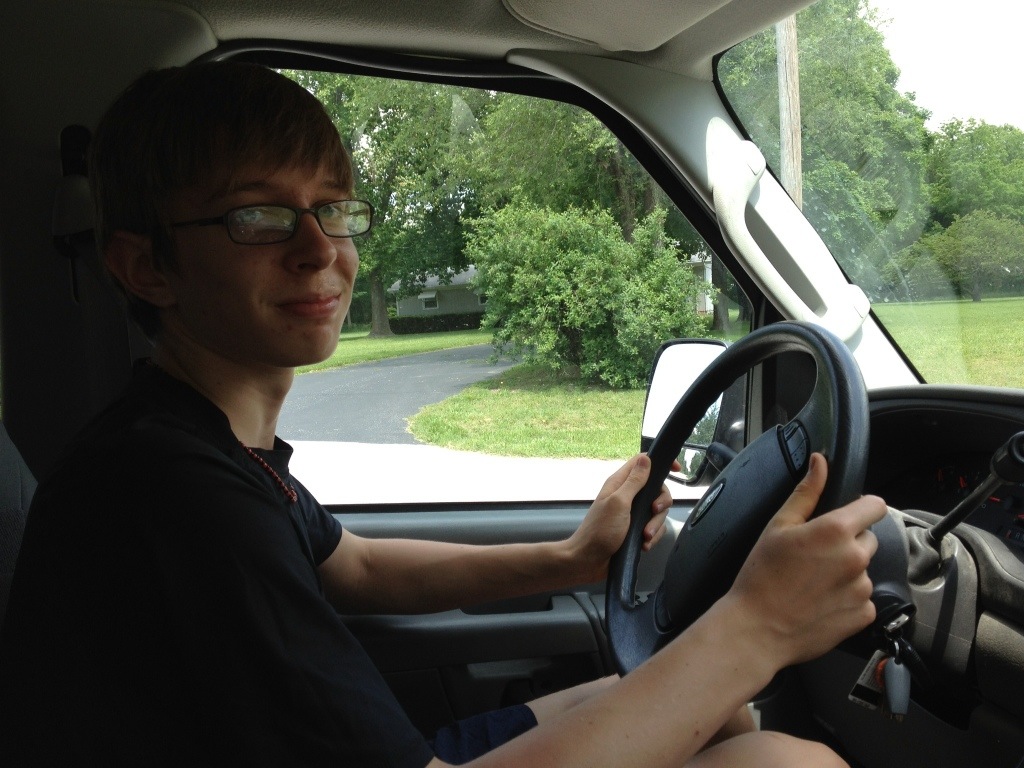 Second trip out, first with the whole family! (BTW, the vehicle was at a complete stop before he posed for the picture!)

1 Thessalonians 5:16-18 (ESV)
“Rejoice always, pray without ceasing, give thanks in all circumstances; for this is the will of God in Christ Jesus for you.”

“We don’t always realize it, but each one of us had come a long way since diabetes first came into our life. It doesn’t matter if it’s been 5 weeks, 5 years or 50 years, you’ve done something outstanding diabetes-wise. So today let’s share the greatest accomplishment you’ve made in terms of dealing with your (or your loved one’s) diabetes. No accomplishment is too big or too small – think about self-acceptance, something you’ve mastered (pump / exercise / diet / etc.), making a tough care decision (finding a new endo or support group / choosing to use or not use a technology / etc.”

In the 8 years and almost three months since John’s diagnosis, I would say I have accomplished a few things:
1) Taking a “one for all and all for one” approach with our new normal. We had always eaten the same thing, so I couldn’t imagine singling John out and making him eat differently. Not gonna happen in this house. (This approach was tested in 8/07 when John’s #2 brother was diagnosed with Celiac Disease.)
The real world will be upon him before I know it and I want to give him a good grounding with lots of healthy food (and a few treats thrown in) in our family setting, with his favorite five friends and his favorite parents not only cheering for him, but being on the same team.
2) Embracing carb counting, in a big way, early on. My preferred method is weighing, second would be measuring, and only as a last resort will I guess. I know people that do, and I can, but it is not perfectly accurate, and since diabetes throws so many curve balls, for no apparent reason, I feel that I should be doing everything I can to keep The J healthy. I think I have bordered on being obsessive about it, so am trying to still be very precise and accurate, while a little less uptight 😉
3) Caring for John while he was a baby, then preschooler, while being pregnant, then having his two younger brothers (5/05 and 7/08).
To be honest though, I am sure that is the reason for some of the downs I experienced with the older three children and homeschooling. As I said in Monday’s post, no one can do it all.
4) Learning from #1 and through much prayer, learned to juggle a little better and began resurrecting/rescuing my relationship with the older ones, who had been expected to “keep on and carry on” while I was so busy with the younger guys + diabetes. It took years, but we are in a good place now. Well, most days. 😉
5) Starting per John’s request at about age four, to turn small areas of his care over to him. He wanted to start with testing and when he started on a pump at age 5 (11/05), he took to that like the jr. engineer that he is! He now can do everything for his site changes, except the actual placement. We are currently working on carb counting.
His nurse practitioner told us when he was tiny that he would get interested in taking care of himself, but I was really surprised when he did at only, age four. Of course, he was a veteran by then.

Whew, this has been an interesting week. Lots of brain, memory and emotion dumping. 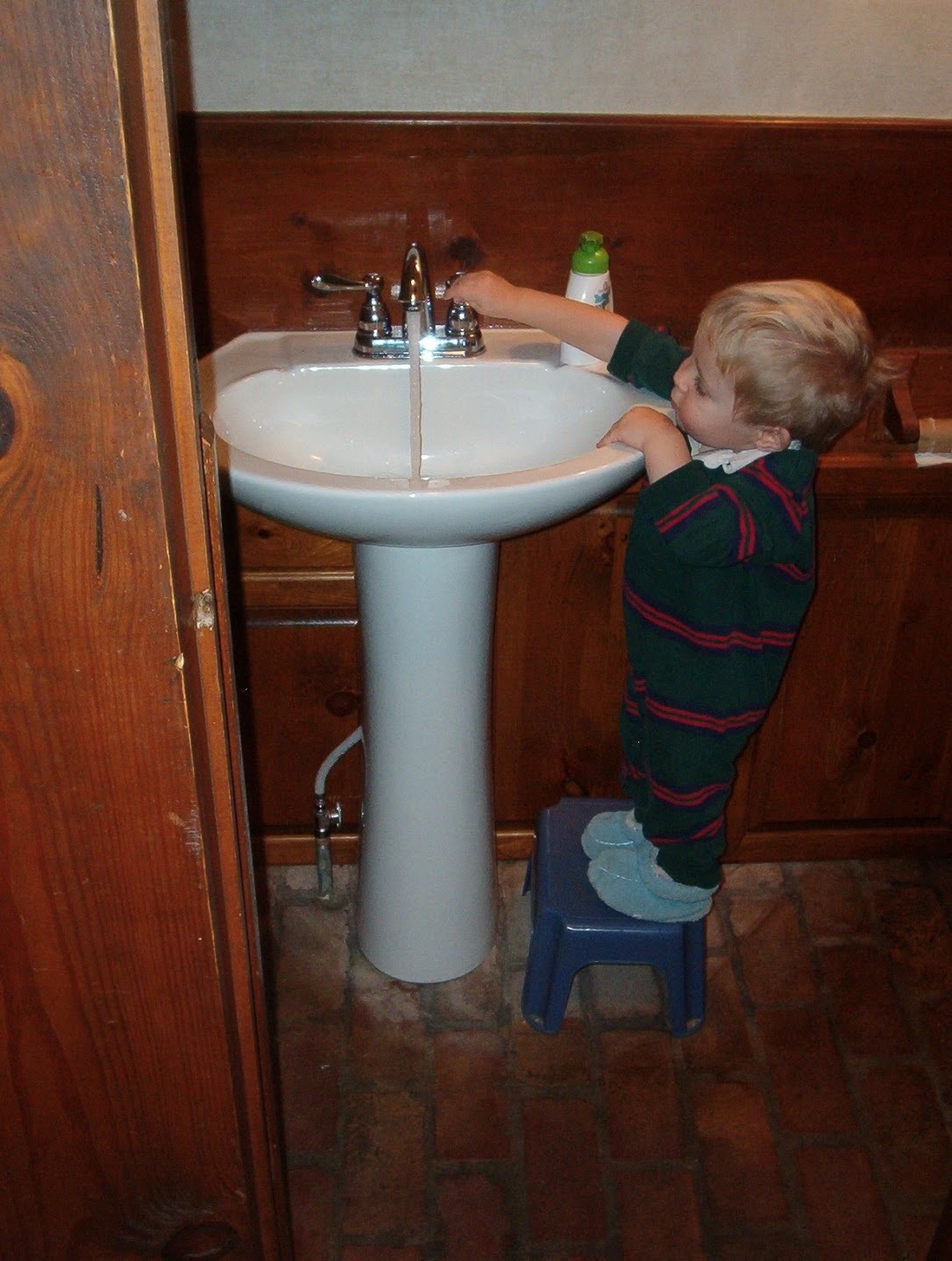 From yesterday’s post, playing at home, just before diagnosis. 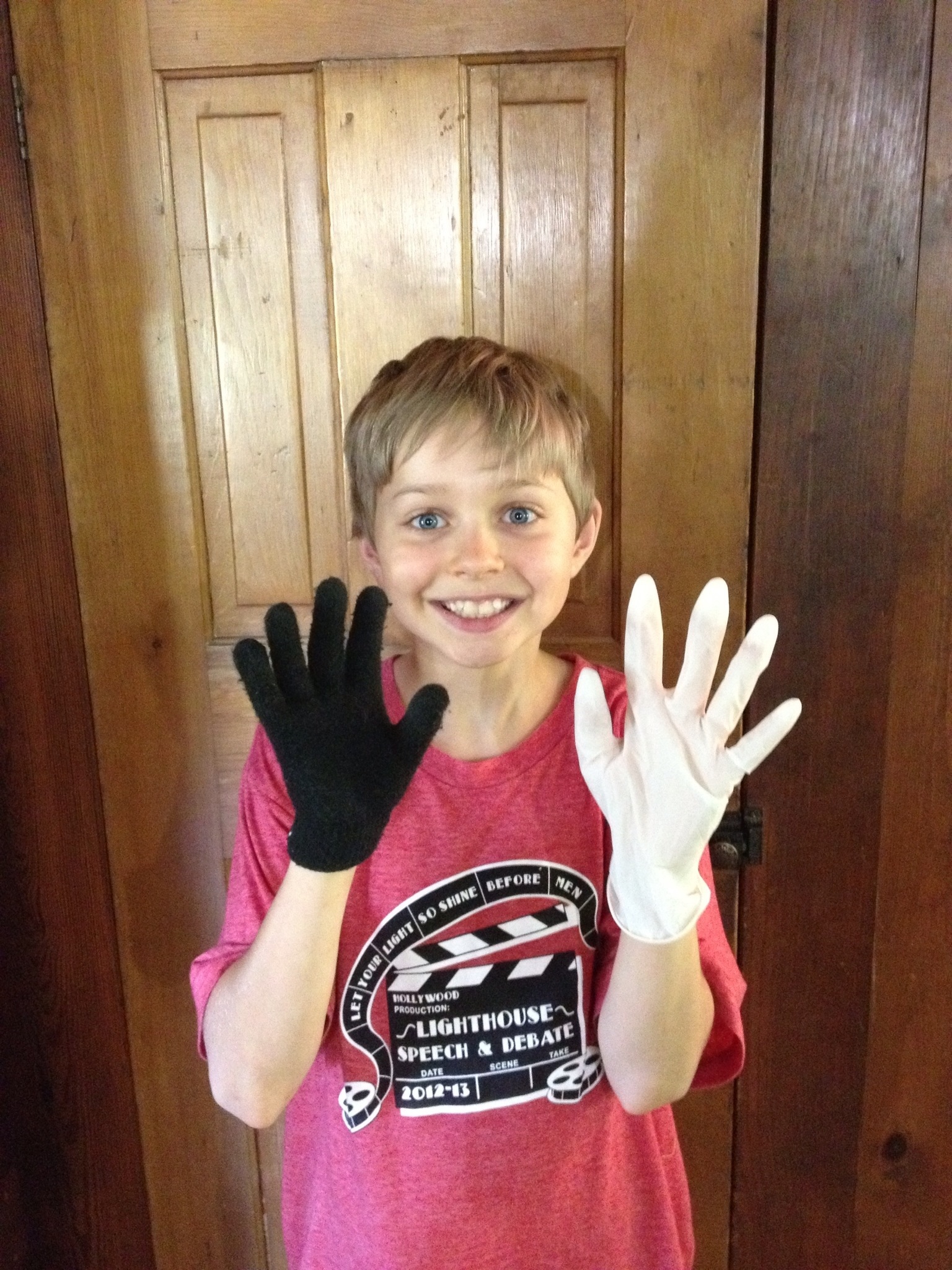 From Tuesday’s post, John testing prototypes of The Testeroni 5000.

Romans 8:28 (NKJV)
“And we know that all things work together for good to those who love God, to those who are the called according to His purpose.”

I need to perfect the kind of Biblical rest that Jesus advocated. He got away to pray. Oftentimes he was followed and needed and he was gracious and responded to those needs. So, I don’t need to feel less when I am interrupted in my attempts at quiet and rest.

My four-year-old reminds me that I need rest. His daddy sent him upstairs for a forced rest yesterday and when he came down, he sat on the stairs and called down “I am praying. Would you pray?” His short, sweet prayers that often consist of something like “Please help me be good” refresh me and remind me that I don’t have to have hours and hours to rest. I need to use the time that I have to rest.
End

My sweet daughter has been sick since last Saturday, progressively getting worse. Following is what I just sent to our “everyone” e-mail group at church:

I took Rachel to the doctor this morning and she was diagnosed with a slight case of pneumonia in the lower lobe of one lung. I was hoping that this would not be the case, but knew that something was up with a persistent cough and no sore throat turning into a mild wheeze.
We are relieved to get a diagnosis and as far as pneumonia goes, this case isn’t as bad as we have experienced in the past. She has started a 10-day course of amoxicillin and the doctor expected that she would feel much better by Monday.

We would appreciate your prayers.

From September: Rachel and her daddy on a date at Panera Bread and at the beach house in Florida.

We are praying for the families that lost children, spouses, friends in the Sandy Hook Elementary tragedy.