On Saturday morning, I dropped my big boys off at our local homeschool conference, then drove 30 minutes west to a stranger’s house in a smaller town.
There, I met two more strangers (who were long-time friends), who had driven 30 minutes east.

The purpose of the meeting: To get acquainted with each other and view and discuss a webcast that was part of a women’s conference, (in)RL. The conference was hosted by the bloggers of (in)courage, a division of Day Spring.

The brave friend (no longer a stranger), who hosted this meet-up signed up to do so months ago. I, on the other hand, registered three days before the event. I had checked the registration page every time it was mentioned in the blog, but just couldn’t seem to commit.
The problem: sheer fear. I finally clicked the register button because I knew it was now or never (or least next year). And how discouraging would it be to offer to host, only to have your offer rejected.

The morning flew by as we shared our stories. We are all mothers, have all been through trials of different types and all love Jesus. We all agreed that we would like to do this again.
New friends. A new community. Centered around Jesus. 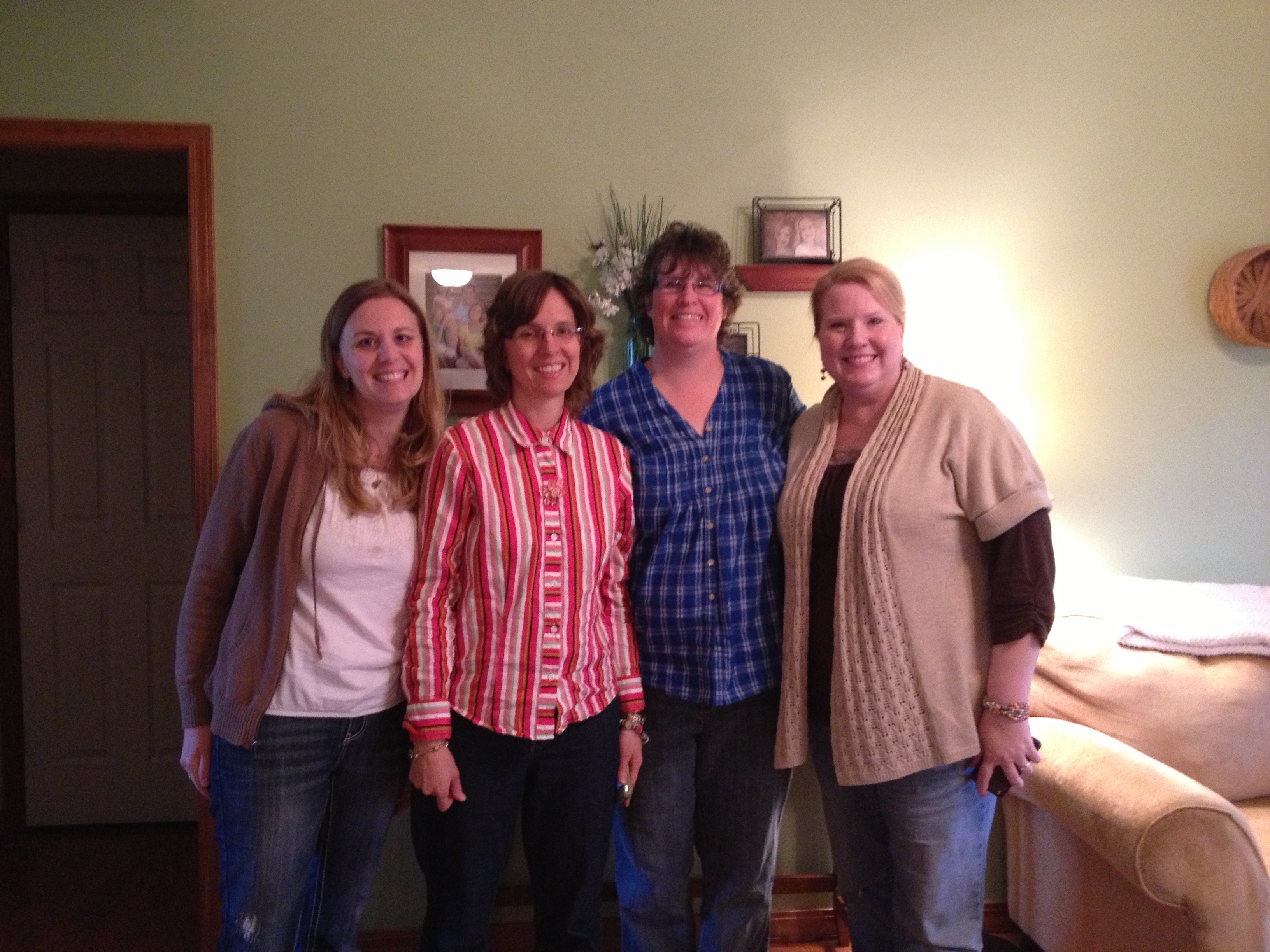 The key quote from the conference was:
“When I heard women speak and share stories that were so authentic and pouring from their hearts, immediately I felt my own defenses just melt away.”
– Michele-Lyn, @LifeSurrendered

A quick review of the webcast:
I watched the Friday night part on my own and we watched part of the Saturday session together. Some of it was good, some helpful, some not-so-much, all-in-all, a bit dis-jointed. It just didn’t seem to flow well. The new friends and fellowship were definitely the highlight. You know, I think that was the point.

The key scripture was:

“If you have any encouragement from being united with Christ, if any comfort from his love, if any common sharing in the Spirit, if any tenderness and compassion, then make my joy complete by being like-minded, having the same love, being one in spirit and of one mind. Do nothing out of selfish ambition or vain conceit. Rather, in humility value others above yourselves, not looking to your own interests but each of you to the interests of the others.”

Since I am not on the fast-track for any blogging awards, not attempting to woo advertisers with my impressive content and feel the need to document the first three months of the year, I have made a list of what I consider to be the top 25 events of the first quarter.

In some cases, they may be “top”, as in most out-of-the ordinary, in other cases, it would be the fun factor and in others, just because I wanted them on the list.

Books read aloud:
5. Me: Jonathan Goforth
6. Me: Wilfred Grenfell
7. Me: Nothing Else Matters
8. Kyle: Little Britches
9. Kyle: Man of the Family

I’ll have to add a bonus because I almost forgot one just for me:
26.Finally joining in to write for Five Minute Fridays.

(This list was written for me and by me. Oddly formatted by me. Links and photos left out by me.)

Philippians 4:4 (ESV)
“Rejoice in the Lord always; again I will say, rejoice.” 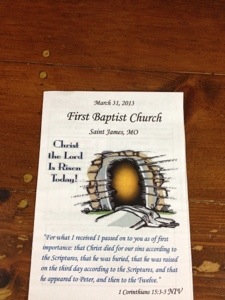 The bulletin from today’s Easter service at Mom and Dad’s church.

You may find the details of the Resurrection as told in each of the four gospels:

Linking up again with Lisa-Jo for Five Minute Friday.

I feel broken some days, less than satisfied others, spending way too much time dwelling on what isn’t instead of learning to thrive in what is.
Some trials come with poor choices, some like illness and loss, just seem to come. There is a plan in those circumstances, it is just not mine. It is a God plan. It takes me time to grasp that and I still don’t always understand or find joy, much less peace in His plan.
Then, there is Jesus, the man who went through multiple trials and he submitted to them. It was His Father’s plan. The plan that I don’t always understand. He submitted to, to the ultimate…death.
Instead of feeling broken, I need to feel grateful. Especially today.

Luke 23:46 (ESV)
Then Jesus, calling out with a loud voice, said, “Father, into your hands I commit my spirit!” And having said this he breathed his last.

For the complete account of Jesus’ crucifixion, death and burial, please read Luke 23:26-56. 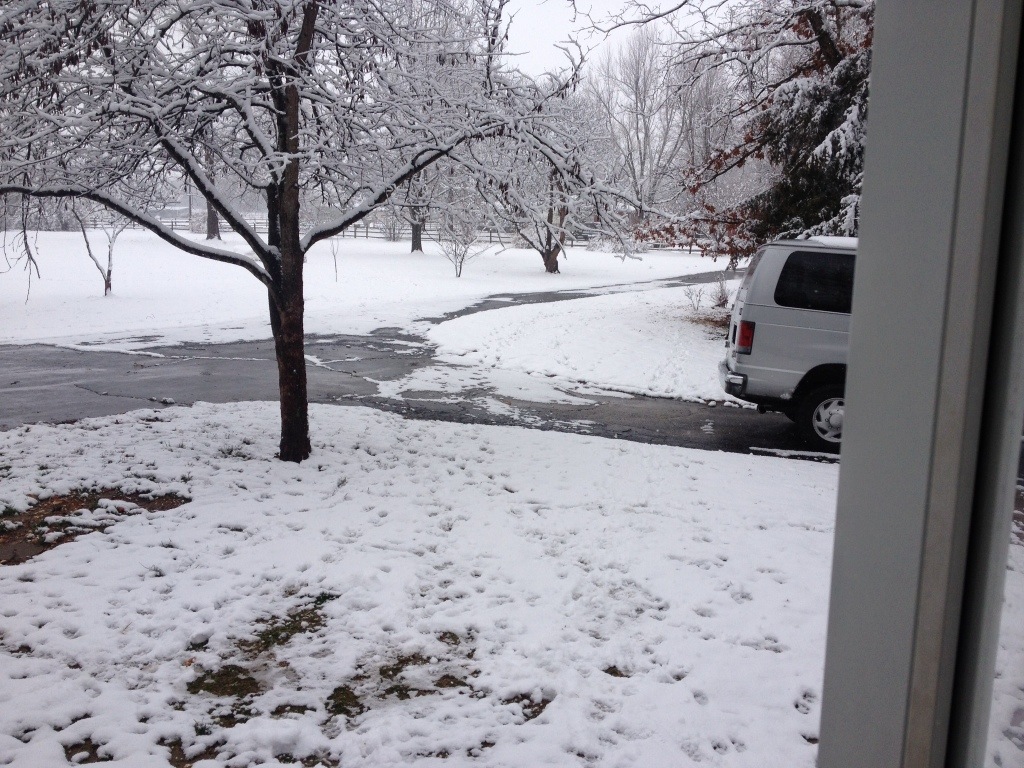 An afternoon view from the front door, in the middle of a restful day having church and fun at home.

Mark 11:8-10 (ESV)
And many spread their cloaks on the road,
and others spread leafy branches that they had cut from the fields.
And those who went before and those who followed were shouting,
“Hosanna! Blessed is he who comes in the name of the Lord!
Blessed is the coming kingdom of our father David! Hosanna in the highest!”

I need to perfect the kind of Biblical rest that Jesus advocated. He got away to pray. Oftentimes he was followed and needed and he was gracious and responded to those needs. So, I don’t need to feel less when I am interrupted in my attempts at quiet and rest.

My four-year-old reminds me that I need rest. His daddy sent him upstairs for a forced rest yesterday and when he came down, he sat on the stairs and called down “I am praying. Would you pray?” His short, sweet prayers that often consist of something like “Please help me be good” refresh me and remind me that I don’t have to have hours and hours to rest. I need to use the time that I have to rest.
End

1. Write for 5 minutes flat – no editing, no over thinking, no backtracking
2. Link back here and invite others to join in.
3. Please visit the person who linked up before you & encourage them in their comments. That is like the one rule we all really care about. For reals.

I have the opportunity to serve my wonderful family. I have been blessed to stay-at-home with my children, beginning with my first-born, almost 16 1/2 years old. Where have the years gone?

Serving like Jesus should always be my goal, but I have sometimes, o.k., lots of times forgotten that. This past Advent season was a very thoughtful time for me. Since then, I feel that I have grown and matured as a mother. Patience, kindness, goodness…just a few of the Fruit of the Spirit.
I served the youngest this morning, by helping him wash his hands and get dressed. I helped three of the middles yesterday, by cleaning up the eggshells that seemed to be all over the kitchen, after they served the family by peeling hard-boiled eggs.
I served my husband by taking care of our home and family while he is away. Home today–yea!!
I served my daughter by making the cough-concoction before bed, so she could sleep better.
I am trying to serve God by loving Him and loving my neighbors, his greatest commandments.
Stop.

For unto us a child is born

“For unto us a child is born,
unto us a son is given:
and the government shall be upon his shoulder:
and his name shall be called Wonderful, Counsellor,
The mighty God, The everlasting Father,
The Prince of Peace.”

The Birth of Jesus

2 In those days Caesar Augustus issued a decree
that a census should be taken of the entire Roman world.
2 (This was the first census that took place while Quirinius was governor of Syria.)
3 And everyone went to his own town to register.

4 So Joseph also went up from the town of Nazareth in Galilee to Judea,
to Bethlehem the town of David,
because he belonged to the house and line of David.
5 He went there to register with Mary,
who was pledged to be married to him and was expecting a child.
6 While they were there, the time came for the baby to be born,
7 and she gave birth to her firstborn, a son.
She wrapped him in cloths and placed him in a manger,
because there was no room for them in the inn.

The Shepherds and the Angels

8 And there were shepherds living out in the fields nearby,
keeping watch over their flocks at night.
9 An angel of the Lord appeared to them,
and the glory of the Lord shone around them,
and they were terrified.
10 But the angel said to them,
“Do not be afraid.
I bring you good news of great joy that will be for all the people.
11 Today in the town of David a Savior has been born to you;
he is Christ the Lord.
12 This will be a sign to you:
You will find a baby wrapped in cloths and lying in a manger.”

13 Suddenly a great company of the heavenly host appeared with the angel,
praising God and saying,

14 “Glory to God in the highest,
and on earth peace to men on whom his favor rests.”
15 When the angels had left them and gone into heaven,
the shepherds said to one another,
“Let’s go to Bethlehem and see this thing that has happened,
which the Lord has told us about.”

16 So they hurried off and found Mary and Joseph, and the baby,
who was lying in the manger.
17 When they had seen him,
they spread the word concerning what had been told them about this child,
18 and all who heard it were amazed at what the shepherds said to them.
19 But Mary treasured up all these things and pondered them in her heart.
20 The shepherds returned,
glorifying and praising God for all the things they had heard and seen,
which were just as they had been told.

We are praying for the families that lost children, spouses, friends in the Sandy Hook Elementary tragedy.

Today is the first day of the Good Morning Girls Advent Study. This is a four-week study that I am very excited to be a part of.
I am in a small group with other home school mothers who “get” what this crazy life is like and understand when I miss a day or two or more. I am working on being more organized (more about that later…) this time, so hopefully I won’t have to miss. Selfishly, I hope that this study will be even better than the last two.