Google defined mercy as :
Compassion or forgiveness shown toward someone whom it is within one’s power to punish or harm.

Merriam-Webster:
Compassion or forbearance shown especially to an offender or to one subject to one’s power; also : lenient or compassionate treatment.

Unknown:
When you don’t get what you deserve.

Elizabeth M.:
1. Something I want to receive and need on an almost-constant basis some days (thinking about the hormone wall I hit yesterday), but don’t do so well giving to others, especially my sweet family.

2. Keeping my cool, when the boys are wreaking havoc on school. 😉 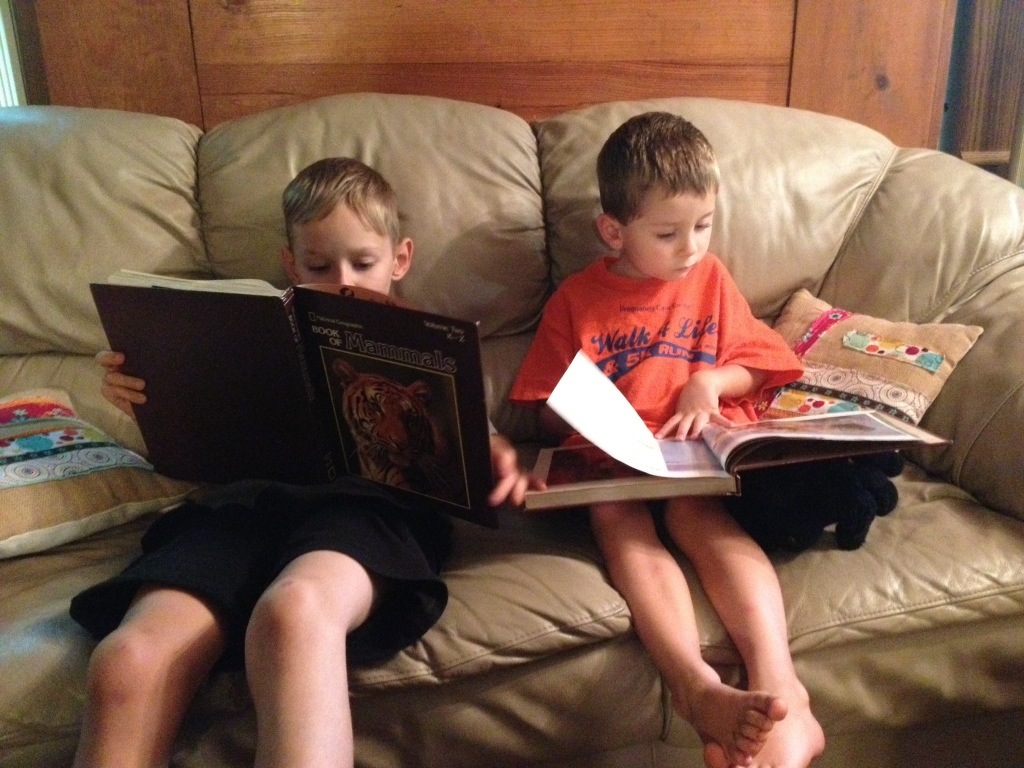 A calm moment with new-to-us/vintage animal books from a sweet neighbor.

This year is a first. The first school year without a preschooler. Paul is official now: a kindergartener. We did Sonlight kindergarten for Adam many years ago and unfortunately or fortunately, depending on whether the glass is looking half empty or half full in the mommy guilt department, Luke, Rachel, John and Isaac pretty much unschooled their way through kindergarten. That included lots of reading aloud by me, some messy spur-of-the-moment crafts, playing, playing and more playing. Those were the good times. The down-side was too much chaos brought on by not enough structure.

I wanted to have a fun, good year with Paul and finish my kindergarten teaching years well. I was very pleased to find an alphabet-themed year on Elizabeth Foss’ blog. I won’t be using the bulk of her ideas, as her plans include studying the Catholic saints and fairy stories. I have theological differences with the saints study, as I am not Catholic, and not using the fairy stories is purely personal preference, as I just don’t enjoy them.
However, she completely had me with the apple pie with letter “a” cut-outs for the crusts.

I used a 40% coupon at Hobby Lobby and bought the Wilton alphabet and number bucket last month. It was hard to keep it in the closet!
I gave Paul the “A” last week and the “B” and “P” for Paul this week. He enjoyed them so much that I gave him the whole bucket and he has been carrying it around the house.
He wasn’t particularly interested in making a pie, so we tweaked the star cookie recipe (the first time using it) from Elana’s Pantry and used the “A”s and had applesauce on the side. 🙂
This week I chose brownies, and we again used (and tweaked) one of Elana’s recipes. 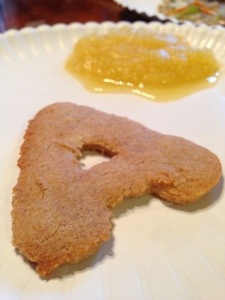 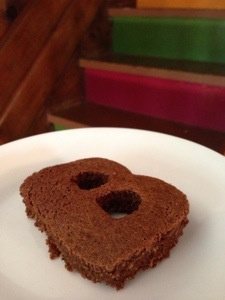 “B” is for brownie on the banister. (Stair view). 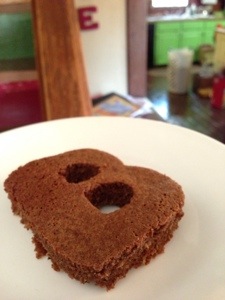 Facing into the kitchen. (Enjoy the clutter). 😉

I’ll write more about what we’re doing for kindergarten next week, plus the other five grades in the next few weeks.